When you first meet Jamie Petrone, it is impossible not to notice her engaging smile and friendly personality. The 42-year-old has an optimistic outlook on life which is a bit surprising given her diagnosis of transverse myelopathy (TM), a type of spinal cord injury that has caused her to use a wheelchair for much of her life. But instead of focusing on her disability, Petrone has broken through barriers and is changing people’s perception of what it means to be disabled.

Petrone was a 19-year-old student studying musical theater at Shenandoah Conservatory and one day was not able to get out of bed. She had suffered a stomach ache at the time and was taking a prescription medication which resulted in a severe allergic reaction and a nearly fatal illness called Stevens-Johnson syndrome. Doctors believe that this syndrome triggered her to have TM which ultimately led to paralysis in her lower extremities but it took almost ten years before she was definitively diagnosed with TM.

The Mission of Burke Neurological Institute

Despite this, Petrone is amazingly engaged in studies to get her to walk again with the help of a team of clinicians and scientists at the White Plains-based Burke Neurological Institute (BNI). BNI is a leading, nonprofit, research institute devoted to curing neurological diseases and injuries. Sixteen laboratories and more than 100 people at the Institute focus on identifying and testing novel strategies to repair the brain and the spinal cord. Strategies include drugs to unlock repair in the damaged spinal cord as well as training devices using the latest robotic technology.  BNI is based on the Burke Campus and works in conjunction with Weill Cornell Medical.

BNI occupies a unique space to help those with neurological impairments including patients suffering from a host of health problems such as stroke, spinal cord injuries, traumatic brain injuries, cerebral palsy, neurodegenerative and retinal degenerative diseases. “The Institute is focusing on chronic neurological disability and neurorestoration or repairing the nervous system,” explains Christine E. Hughes, the Vice President of Institutional Advancement at BNI. “We don’t want to teach people how to use a wheelchair or crutches. We want to repair the patient’s nervous system so they can walk again.”

Petrone was lucky enough to be a participant in a clinical trial at the Institute in the Lower Limb Robotics Program with Amy Bialek, a physical therapist and Chappaqua resident conducting research on the use of robotics for spinal cord injury.

The clinical trial which Petrone enrolled in had a strict criteria and Bialek screen hundreds of patients before she found a small subset of patients that met the criteria. Currently, for those that do not qualify, BNI is developing wellness trials to identify how to keep those with spinal cord injury fit and pair with emerging clinical studies. When you have a chronic condition like Petrone’s, physical therapy offers limited benefits and insurance often drops patients after several sessions.

It is no wonder that Petrone, a former high school softball player, dancer and swimmer is doing everything possible to win that battle and regain her ability to walk. Enter the EKSO, a wearable battery-operated exoskeleton that enables individuals like Petrone to stand and walk on level surfaces. The EKSO is just one of several therapeutic devices/robots that BNI is testing to help patients repair their nervous system. And while their clinics have robots to help restore function in other areas of the body for patients such as the wrist, arms and hands, the team at BNI is betting that a combination of a robot to train new functions combined with a drug to optimize new learning in the damaged nervous system will be the way forward. 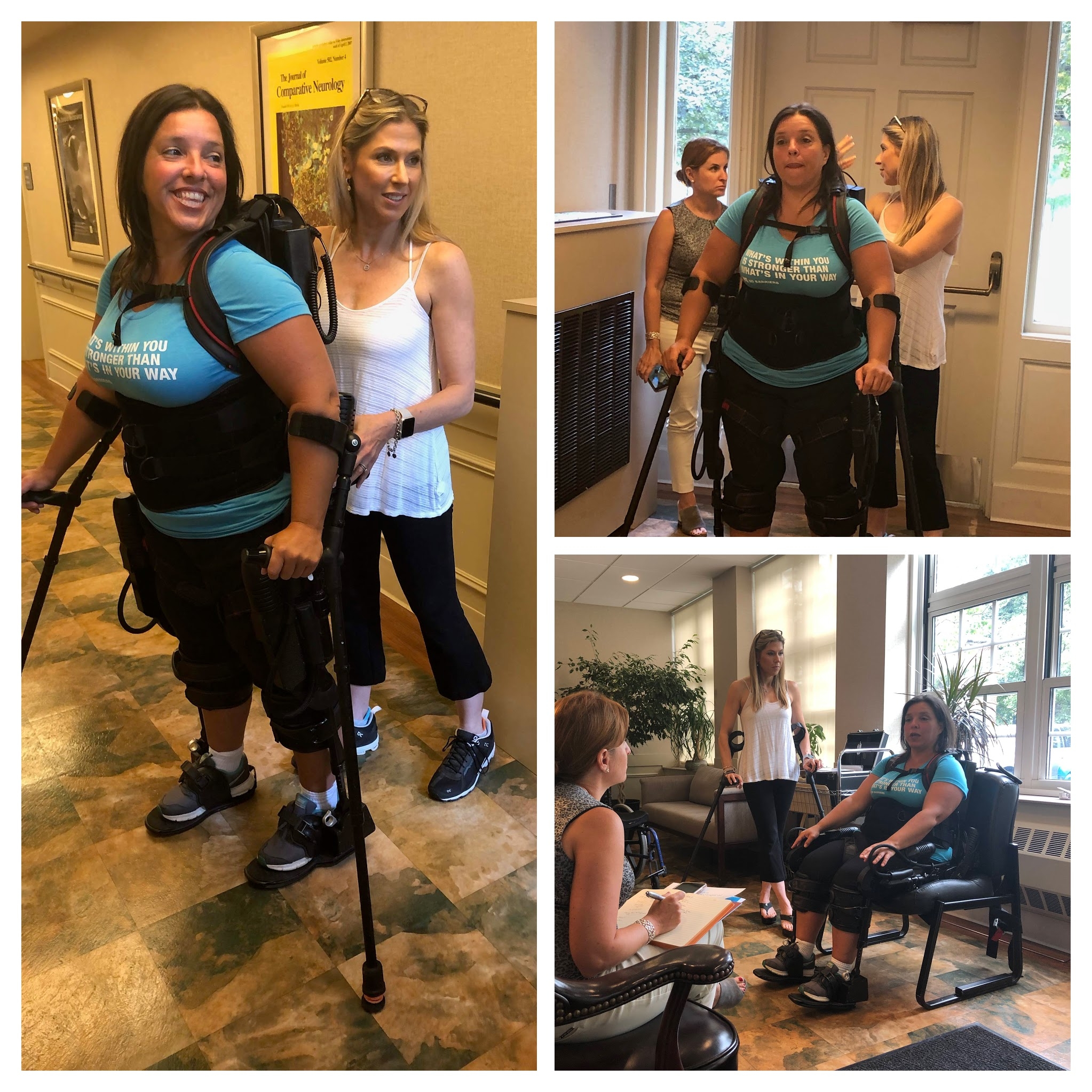 “When Jamie is upright with the help of the EKSO, our data to date suggests that she is improving her mental health, her skin and bone integrity and her cardiopulmonary function. There needs to be a place that is leveraging the best in contemporary neuroscience to get people out of their wheelchairs,” urges Bialek. Essentially, the EKSO is helping Petrone rebuild neural pathways and her muscle memory through repetition. In the beginning, she had to look in the mirror when she used it but now she does not need it. “I see real progress with it.” Petrone’s situation is also unique in that she can’t take any prescription pain killers as many spinal cord injury patients do because of her Stevens-Johnson syndrome so exercise and restorative therapy offered at BNI really is her only hope.

Petrone likes to keep active whether it be through adaptive sports such as waterskiing and biking or her performing career which is just as impressive as her determination to walk again one day. Petrone currently is the Executive Director & Founder of THISAbility, a Performing Arts Conservatory and Professional Theatre Company, cultivating inclusion in the arts. She is also the Executive/Musical Director for Tabor Arts in Branford, CT, musical director for numerous schools in Westchester County through The Westchester Sandbox Theatre in Mamaroneck, and teaches voice and piano privately.

She originated the role of Bonnie in the Off-Broadway show, The Healing, by Samuel D. Hunter (NY Times Critic Pick) and has also had recurring television roles on Madam Secretary and Law & Order SVU. In addition, Petrone was featured on the Today Show segment “Everyone Has a Story” where she sang and is also the subject of a documentary called “And Seen” which has won awards at film festivals and is continuing to play on the festival circuit.

The life of a performer is hard with Petrone auditioning for several roles but hers is ever more complicated by her disability and the therapy she requires to help her maintain her independent and active life. (Petrone lives alone, drives a car with hand controls and travels extensively.) Insurance wants her to receive treatment or therapies only in Connecticut where she resides. But Connecticut does not have access to state-of-the-art rehabilitation therapies like those offered at BNI.

Besides auditioning for her roles and her various jobs, Petrone has also participated in a boot camp for spinal cord injury patients at the Kennedy Krieger Institute which is affiliated with John Hopkins University in Baltimore. When Petrone first went there, she was introduced to various robots to help her regain function. I felt like I was only getting compensatory therapy until then. I felt like I had wasted years of my life in this wheelchair. Why didn’t I know about these therapies?,” she asked. Petrone and medical experts agree that actor Christophe Reeve pioneered to change the paradigm of how spinal cord injuries are treated.

“There are a lot people that don’t know what is available to them. I wish that people knew about the advances in technology and what is happening more regularly now—these restorative programs could make a real difference in people’s lives,” Petrone noted.

Still Petrone wonders about what will happen to her when the study ends. “What happens next?,” she asks. “I see progress and I am killing myself to keep going—I have to keep going.”

But there is some good news in store for patients like Petrone. Governor Andrew Cuomo just announced this summer a $5 million grant that will allow NeuroCuresNY, Inc. (NCNY) to conduct a two-year demonstration of its unique clinical trial network and process for testing drugs to treat disability due to neurological impairment. NCNY is a not for profit initiative and BNI is one of the founding members of it. (VERIFY) the demonstration trial will focus on stroke, but set the table for combine the use of medication to repair the brain along with robotic training technology like the EKSO that Petrone used in her trial. (VERIFY) the two-year trial will first focus on stroke patients but there are plans to evaluate treatments for disability due to other neurological conditions such as Alzheimer’s disease and spinal cord injuries like Petrone’s.

Commenting on the grant, Dr. Rajiv Ratan BNI’s Director said that “millions of Americans and their families struggle on a daily basis with the challenges from being disabled from neurological diseases such as stroke and spinal cord injury. The enduring lack of treatment options to significantly address the challenges that people with these neurological conditions face highlight the need for a novel, game-changing approach.”

Stacey Pfeffer is the Editor of Inside Chappaqua and Inside Armonk. She particularly enjoys writing healthcare stories.