My laboratory research focuses on a better understanding of the pathophysiology of stroke, and the identification of potential therapeutic targets for intervention. My lab is especially interested in the study of the inflammatory response and how it participates in injury from stroke. Although inflammation has largely been thought to be mediated through blood borne elements, the brain also has resident cell populations which also contribute to this response. Microglia, in particular, are thought to be of the monocyte lineage, and are activated following infection and various injurious stimuli. In whole animal models of stroke, we explored two novel innate immune receptors not previously studied in stroke models. Recent focus in our lab has involved the study of innate immune receptor triggering receptor expressed on myeloid cells-2 (TREM2). We showed that TREM2 was important in the recovery of neurological function in a stroke model by virtue of its phagocytic properties. We studied TREM2 deficient mice, and found that strokes created in these mice failed to resorb due to inhibited phagocytosis. As such, these mice had worsened neurological outcomes compared to wildtype (Kawabori et al, J Neuroscience 2015). Ongoing work in our lab includes studies to determine how TREM2 might be involved in improving outcome from stroke, and whether TREM2 can be induced to higher levels in microglia to improve stroke outcome. We are also studying whether TREM2 might have a similar role in models of traumatic brain injury.

We continue to pursue a long held interest in the role of heat shock protein 70 (HSP70) in brain injury. We were one of the first labs to show that this protein protected neurons from stroke, and did so through an anti-inflammatory mechanism. Conversely, HSP70 deficiency worsened outcomes (Kim et al, Neurobio Dis 2013). We then explored whether HSP70 could be induced pharmacologically, and whether this might be protective. We first studied a panel of HSP70 inducers in our cell culture models, and identified 17-N-allylamino-17- demethoxygeldanamycin (17 AAG, also known as Tanespimycin) as a candidate lead compound based on lack of cytotoxicity and robust Hsp70 inducing and anti-inflammatory properties (Kacimi & Yenari, Glia 2015). We then treated mice with an analogue of 17 AAG and showed that it induced HSP70 in the brain. Treatment of mice exposed to experimental TBI led to improved outcomes, comparable to that seen in our HSP70 overexpressing mice (Kim et al, Neuroscience, 2015). 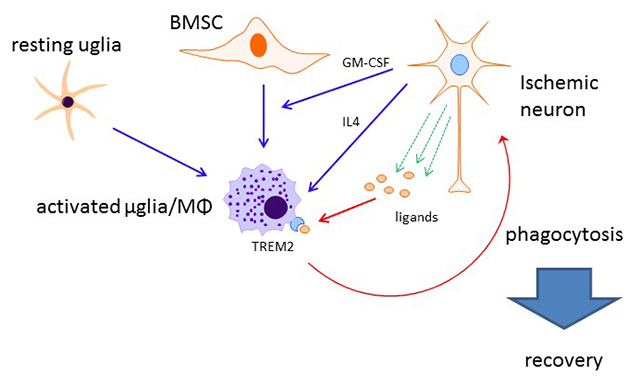