Together with Dr. Patsalides in the Neurosurgery Department at Weill Cornell, Dr. Dinkin has run studied over 50 patients undergoing venous stenting for IIH. The effect on intracranial pressure in 50 patients who underwent pre and post stent lumbar puncture, were significant in almost all patients – this data was published in 2019. Significant recovery of papilledema and visual function was demonstrated in the first patients studied in 2017 and earned the J Lawton Smith award for best research article in the Journal of Neuro-ophthalmology that year. Similar results for 28 patients are in preparation.

Dr. Dinkin’s work on retrograde trans-synaptic degeneration (RTSD) in the human visual system began when he began to notice homonymous thinning of the retinal ganglion cell layer (GCL) as measured by optical coherence tomography (OCT), in patients with homonymous vision loss due to cortical injury. Such corresponding retinal atrophy, in the absence of pre-geniculate injury would have to reflect a trans-synaptic degeneration, which for years, was felt not to occur in the human visual system. A study was then conducted looking at 22 patients with homonymous vision loss from post-geniculate cortical injury, in which 15 demonstrated RTSD, and in which the degree of asymmetry of the GCL was associated with time since injury. Dr. Dinkin is now looking at the time course of RTSD in patients with multiple OCTs following cortical injury and is examining optic disc cup to disc ratio over time to assess whether there are morphological changes in the disc that accompany RTSD. 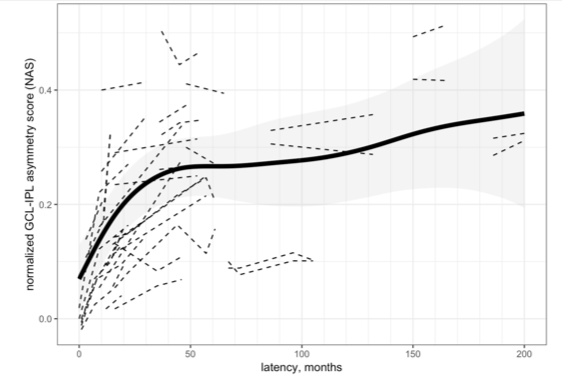 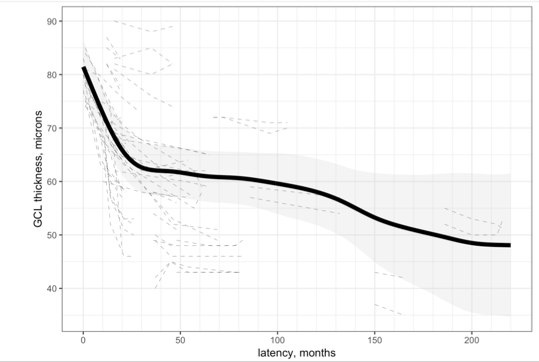 Traumatic Brain Injury
In the U.S., over 5.3 million adults and children live with TBI.

Retinal Degenerative Diseases
Will double by 2050.